Shane: Thanks Daniel. How are you going?

Daniel: Very Good. How are you today?

Daniel: It’s good to have you back on the show again.

Daniel: Today we’re going to talk about adding an egg business to an existing farm. It’s something that alot of people could do. You don’t need to start a farm just for chickens, you might have other animals or an orchard and add an egg farm to it. I wanted to talk about in your experience how that worked for you and the benefits of that.

Shane: Yeah, we come from a beef cattle background. Our parents, both families, my wife and I both have beef cattle and we looked at it as, I suppose the initial thing was the cost of fertiliser, cost money wise, and just how good are our chem fertilizers for our soil. We started looking at it in few different ways, of a more natural way to fertilise and also as a dollar cost.

When we looked at that and what we could do by introducing chickens, it was pretty exciting. We saw that if you’ve got someone moving beef cattle about for you, or you’re doing it yourself, so you’ve already got the labor component there, out in  the paddock. Then another job out there, collecting the eggs or moving the chickens, isn’t going to be too much to ask. 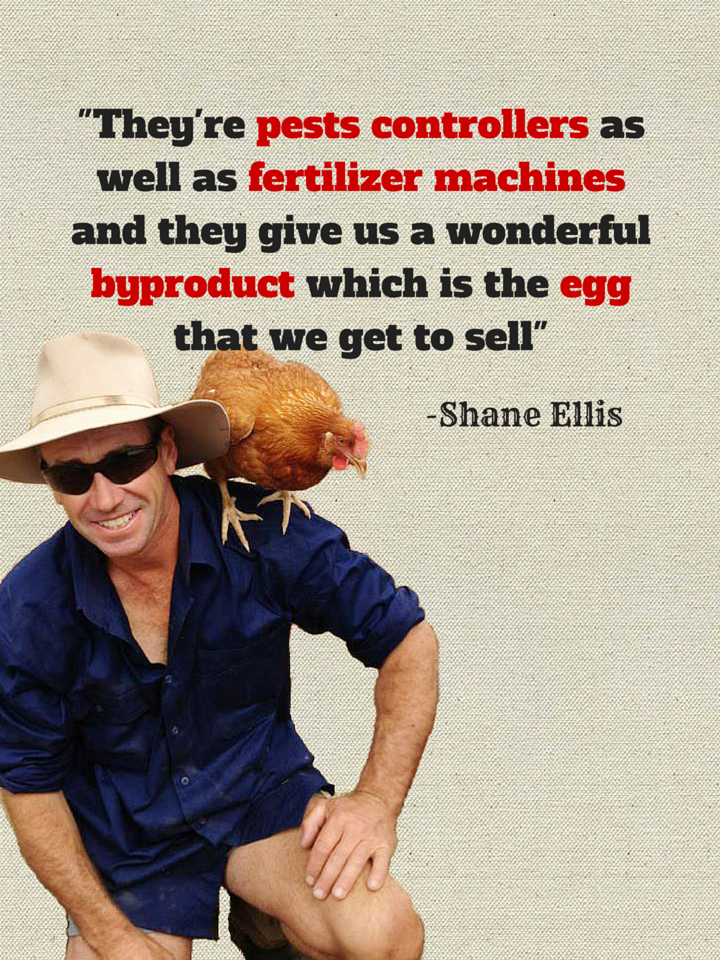 Daniel: Yeah, so they thought, save a  bit of money, don’t put as much on, but, you get what you pay for, you don’t put it on, you don’t get the results, that sort of outcome.

Shane: As I say, they’re probably looking at a more natural approach to it. Chook manure has always been fairly popular to spread on farm, from the big factory set ups, not that I’ve done that, but I just think you can’t do any better that getting it straight from the manufacturer – the chicken. They are great. It’s not just the fertiliser, we’ve realised as well, but busting up cow dung, if you haven’t got active dung beetles there. You might have crickets come in or slugs, grubs, that sort of thing that might come in that you’d normally be quite concerned about in pasture crops. Your chickens love them and they do really well out of them, its protein, and I  don’t have to pay for it.

Daniel: Yeah that’s brilliant, I know I got customers down in south Australia and they get this little white snail and it’s not something I’m familiar with but the chickens love it cause a snail is protein and they just annihilate these things. In the area, when I say, annihilate, they don’t wipe it out of the entire region, but if there’s a new paddock they go in to with these little snails they’re like “yeah, it’s Christmas let’s eat these things”. They do a fantastic job on little bugs and beetles and such.

Shane: They’re pest controllers as well as fertiliser machines and they give us a wonderful byproduct – the egg that we get to sell.

Daniel: Yeah. How have you found integrating them with cattle? Obviously you have the benefit of the fertiliser,

they eat bugs that could come in, they can spread the cow manure around, which in itself is a good thing. Is there any downsides that you have to look at if you already have cattle and you’re going to bring chickens into the mix? Is there any conflict, from your experience, why it wouldn’t work?

Shane: No, I think you just look at your grazing plan, depending on what type of grazing system you run with cattle. If it’s a fairly set stocking sort of arrangement where they’re in a paddock for a long period of time, it doesn’t work all that well with chickens. We prefer a shorter, more intense graze time and with a longer rest recovery period with our cattle, for grass.

That also works really well for the chickens as well, the rest recovery time behind them to let their fertiliser do the work, the impact that chickens that may had on the ground, gives it time to recover. I think probably the only thing that some people may have to look at changing their grazing management with cattle, that might not be re-fencing the whole farm they might just be done with poly wires, just in front of your chicken enclosures.

Daniel: Yeah, so with your current grazing plan with your cattle, how long are they in an area for? they move daily? or weekly? or what are you looking at.

Shane: It depends on the time of year, if we’re on a high growth time, I’ll move them more often and they’ll be on smaller areas, so that works really well with the chickens. So, looking at up to two days and unfortunately the chickens can’t keep up with the cattle so sometimes we do have to come back and we might have to do a very gentle re-graze which we have to be careful about doing so that we don’t exhaust plants, but we do a re-graze just so that electro netting works and protects your chickens.

Daniel: Yeah, so eating that down in front of the chooks where you’re about to move them on to.

Shane: Yeah if you don’t do that, that’s fine, as long as you run wheel tracks or something where you’re going to put your electro netting, that’s fine, look, I like to do it with the cattle where I can, as long as I’m not over grazing.

Daniel: Ok, so what have you found since you’ve started until now, the impact that chickens have had? Because the motivation being cost of fertiliser, to save that, how long was it till you first saw a result? What are you looking at now in terms of the fertiliser the chooks are bringing to your farm?

Shane: Yeah, you could almost say its immediate depending on the time of year. In our growth season it is immediate, you’ll see, for a high growth time, you’ll see the square, if the chicken caravan is sat for one or two nights in one place. After a rest of fourteen days, you’ll start to see exactly where that van sat. If you’re just moving it forward, you almost see this long rectangle line running up your paddock and you think,”Oh, what’s going on there “but that’s the effect that the chicken manure has in a growth time.

You won’t see it in – we have four seasons here, our two growth seasons here are autumn and spring – winter we just have to be a little bit careful of damage. But it’ll set you up, if you can get chickens across paddocks in the winter, not causing any damage or minimal, as long as you have long rest recovery time, it’ll be ready to go and really set you up for the spring time. 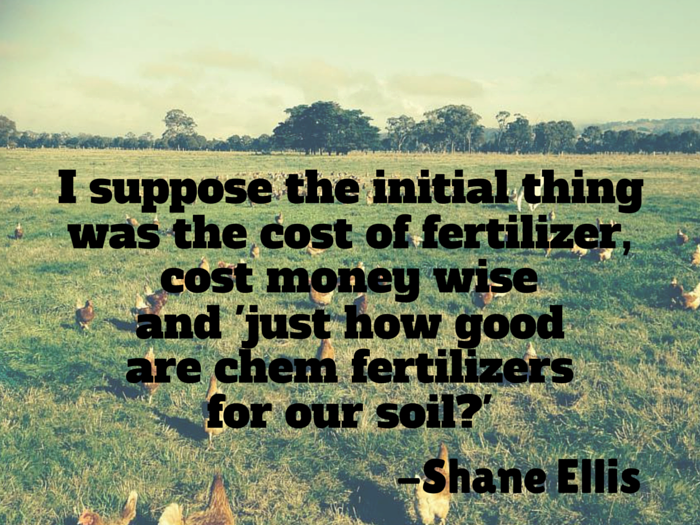 Daniel: Yeah ok, because all that manure is effectively just sitting in the ground or on the ground and when that bit of rain comes it’s just going into the whole system and turning it into good grass.

Shane: Yeah, that’s right, and even though you could be standing inside one of the 50 by 50 enclosures the chickens are in, you’ll see under the van, they’re doing mostly pooping at night. You try and find a spot on that paddock to sit down and you’ll be sitting in chicken manure as well, so they spread it out.

Daniel: Yeah, obviously it’s a good area and that’s what we covered in the last podcast when we talked about electric chicken fencing, that 50 by 50 metre area. It’s not too small where they’re going to over graze it and pound it cause we don’t want that, but it’s not too big where they’re not doing an impact.

Shane: That’s right and another thing too is, it might not be your farm you’re bringing the chickens too. I worked for a family, managed the day to day operations on a beef property of theirs as well and for us to take chickens there I go there everyday to move cattle and to do general maintenance as well, so for us to take chickens there which we’ll be doing fairly soon, it doesn’t really add anything on my day except that bit of time to go and collect. The vans are very efficient so it’s a matter of collect those eggs, move my cattle, do my other work and at the end of the day, take the eggs home with me.

Daniel: Yeah right, so the motivation to take your chickens to another farm, again, is for fertiliser for their farm.

Shane: That’s right, we’re looking at a more natural approach there as well and a time management, time grazing system with the cattle and the chickens will be a great addition to that operation as well.

Daniel: Yeah, fantastic so it sounds like, if you want to save money on fertiliser you get it straight from “the factory.” I like that. Straight from the little chicken and they’ll run around and spread it around that area. So as long as you keep moving that area you’ve just got fertiliser on tap and you get a benefit of eggs which you can sell.

Shane: That’s it, that layering on farm, that additional income.

Daniel: Yeah excellent, we’ve just been a short episode but I think we’ve covered what we need to. So for anyone 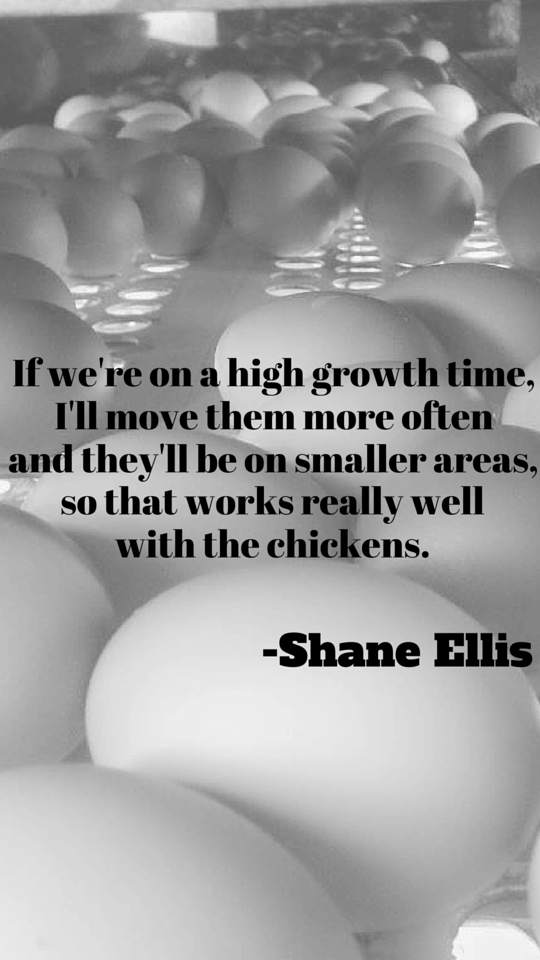 that is going “ok going to spend so much on fertiliser,” look at the options of chickens cause they’re going to sort out that fertiliser for you and you’ve got a profitable business to be able to sell eggs. Done right, as long as you’re not over grazing, it’ll actually benefit your beef operation or any other operation for that matter. It’s not a case of you have to buy some chickens in but then get rid of half your cows cause it’ll work in conjunction is that what you’ve found as well?

Shane: It’s a really good point Daniel, it really is. You wouldn’t have to sell. If you’re grazing property with your beef cattle as long as you’ve got grass behind you, you wouldn’t have to sell one of those cows to bring in 400 or 800 chickens. In fact what you’d find after probably as short a time as one year, is that you may need cows cause you’ll be growing more grass.

Daniel: Yeah, that’s fantastic just to know that. That’s what every farmer wants, more grass. You’re doing that by adding another income stream to your farm. It’s almost unheard of, like, how does that work?

Shane: Yeah, if you increase that carrying of cattle it’s like someone’s just given you more land for free, and you’ve had that additional income of those eggs from the chickens.

Daniel: Yeah so, you don’t have to buy more land, you don’t have the cost of fertiliser and you’ve got another income stream being eggs, and in time, done right, you can actually increase your cattle, that’s a win-win, a tick in all boxes. Thank you for your time again today Shane, I’m sure everyone has got alot of benefit out of what you have had to share.

Shane: Good as gold, Thanks a lot Daniel.

Get Email updates and never miss an episode